The 2019 Symonite OK Dinghy World Championship, which has just concluded at Wakatere Boating Club in Auckland, New Zealand, was an outstanding success both on and off the water. It is not hard to see why the class is attracting some of the biggest names in sailing and is in demand at amazing venues around the world.

On the water, the 1994 Laser Youth World Champion, and three-time Olympian, Dan Slater, from the home club, set a pace that few could match. He almost had the title sewn up with a race to spare but the fickleness of the breeze on the final day left everyone guessing as he fought against Fredrik Lööf right to the finish line in the final race. They crossed neck and neck, but the Wakatere sailor had done enough to take New Zealand’s 13th OK Dinghy world title.

Slater was attracted to the class because of the large numbers sailing each weekend at the club and took the traditional approach to begin his OK Dinghy career by building his own boat. A few years ago Dan Leech from Christchurch, New Zealand, produced some CNC kitset plans with the aim that anyone could build an OK using these files anywhere in the world where the parts and panels could be CNC cut locally. One of the first boats built to this method won the 2014 world championship in Melbourne, Australia.

The Kiwis have since taken this to an art form, with six out of the top 10 last week sailing a Leech designed hull, including Slater. Interestingly, many sailors used professional help to build these otherwise cheap boats. Based on the ever-fast Kiwi Icebreaker design from the 1970s, it is a proven performer across the wind range. 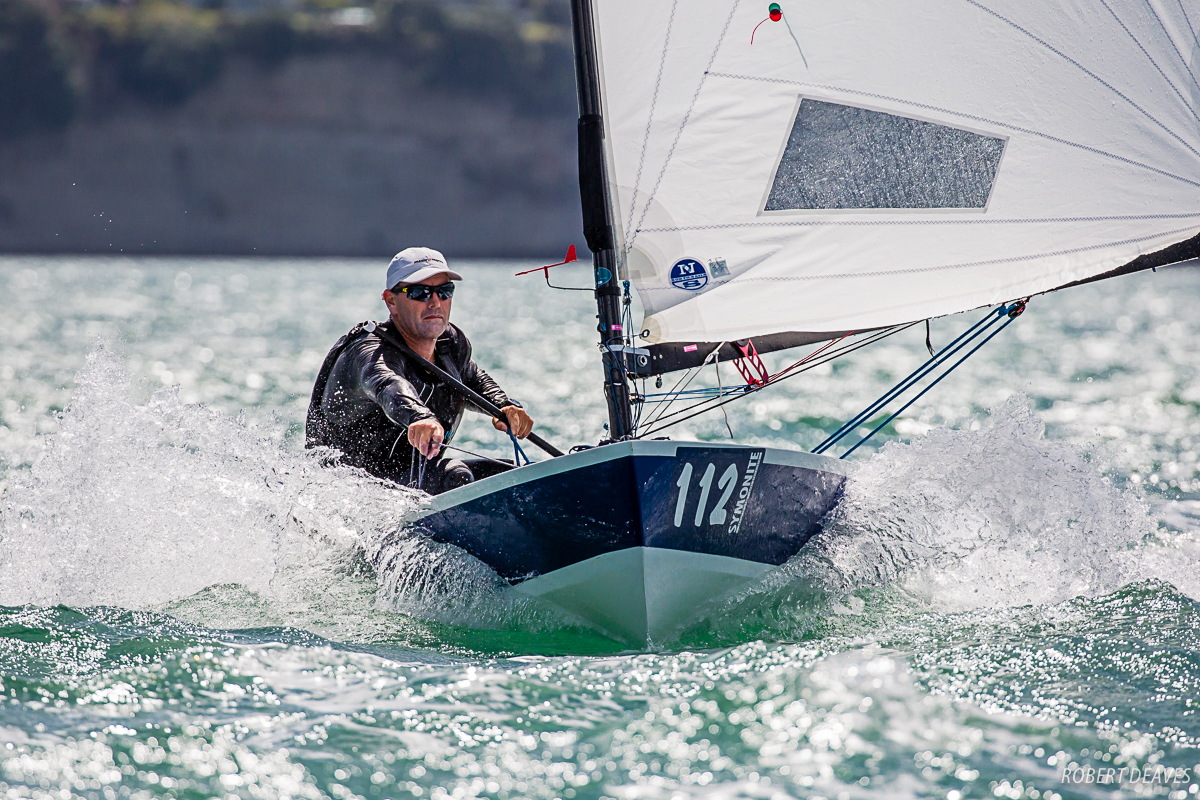 In second place, the three-time Olympic medalist, Fredrik Lööf, was sailing a UK built Ovington hull. Last year Ovington hulls won both the world and European championship, but Lööf struggled this year against the well-prepared Kiwi team. Lööf returned to the class last year after a 30-year break and is loving the competition and atmosphere, and has promised to be back for more.

In recent years the class has seen extraordinary growth, not only in one of its heartlands in Denmark, but also in Sweden, France and in the run up to this world championship, in New Zealand.

This year’s championship also welcomed two sailors from the USA, once a strong OK nation. Coached by a certain R. Coutts, both went home from their first OK Dinghy regatta full of enthusiasm to rebuild the class in North America, and with lots of ideas and actions to put into place. As is often the case it only takes one person with enthusiasm to develop a fleet, so the class hopes this is the beginning of a revival. There is certainly a lot of OK history and OK lore in that vast potential market.

The class is in a happy place. More boats are being built worldwide than at any time since the 1970s, but to understand why this is happening it is important to look at the demographic of the class and the type of sailor for which it is now appealing.

While the age of the sailors in Wakatere ranged from 17 to 71, only 22 out of the 111 competitors were under the age of 40. Most of those sailing in the class last week have come back to the OK Dinghy later in life, whether that was for family reasons, racing in other classes, sailing keelboats, or for some, managing an Olympic campaign. Of course  in many cases some have never actually stopped. While the class does encourage junior participation, and at least week’s AGM changed it’s Junior status to U23, it is in the middle age bracket where the greatest growth has been acheved.

For many like Lööf, the OK Dinghy marks a return to a more pure form of sailing; no less challenging but very much back to basics with the competition coming from the other sailors, who are generally all there to have fun with their friends while racing hard, and in some notable cases, partying harder. The fleet worked exceptionally hard to make its way through the 6,000 cans of, mostly free, beer supplied by many of the huge number of sponsors that the club had been successful in attracting. 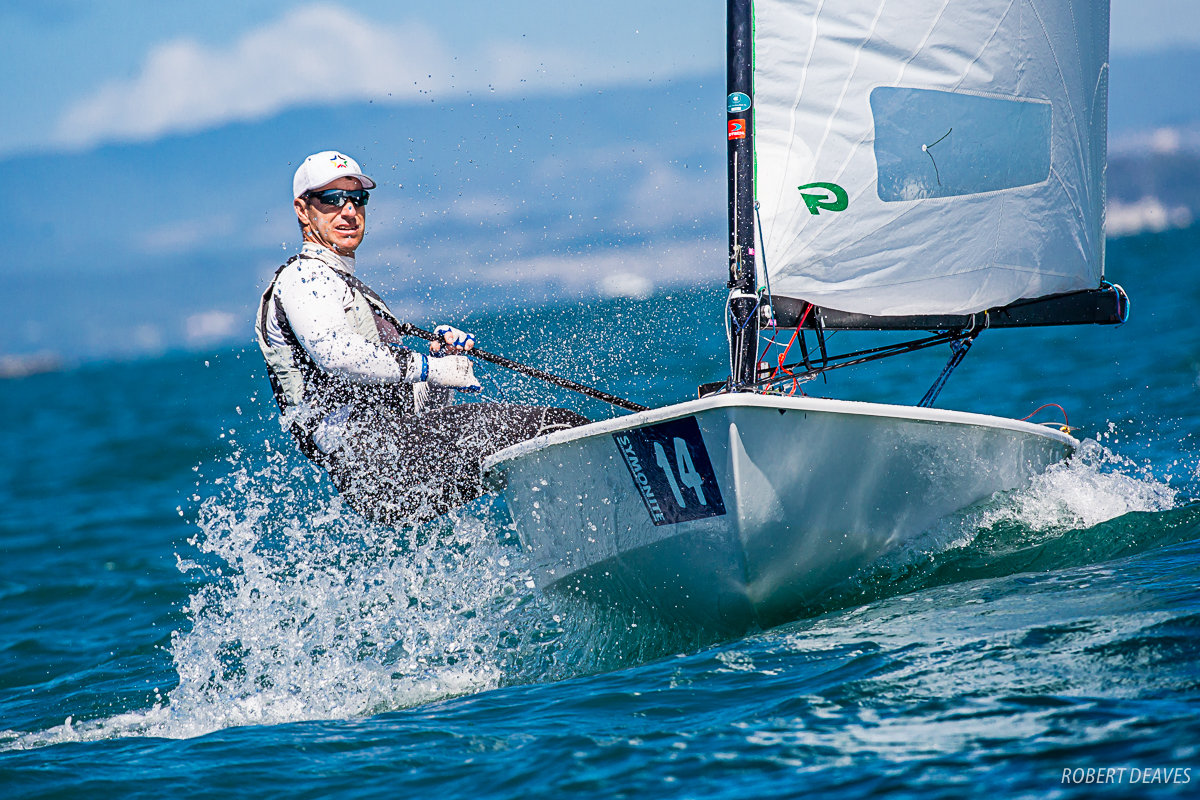 One of the many standout performances of the week was from 17-year-old Josh Armit. The current Youth World Champion in the Laser Radial class won two races and finished just seven points away from the title. He was coached this week by his father, four-time OK Dinghy World Champion, and winner of New Zealand Yachting’s Yachtsman of the Year Award in 1985, Leith Armit.

One of seven Kiwis in the top 10, Armit was the only one not to sail a Leech kitset hull. Instead he sailed an old Marten Marine Icebreaker hull that was built more than 35 years ago, and was one of the oldest boats taking part. Speaking to Sail-World.com, he said, “The OK is a real fun boat to sail, you get some good rides, and the technical side of it is cool. There’s more rig controls than the Laser, which is nice.”

The young Armit would seem to have a great future ahead of him, but what did become apparent during the event was that his future pathway is now clouded by Olympic class decisions. Finishing third behind two successful Olympians it was clear where his future should lie, however his own federation currently support a programme that may limit his chances of emulating Slater and Lööf.

Speaking openly to Sail-World he also said, “For a youth sailor moving into the Olympics it is hard to know what your options are. What is the pathway now to the Olympics? How do we prepare, not knowing with any certainty as to which classes are going to be at the Olympics? It makes it very tricky to decide.”

At 80kg Armit was one of the lighter sailors at the championship, but admitted that he is already expecting to be too big to be competitive in the Laser or any of the other singlehanded classes currently proposed for the 2024 Olympics. “I’m still growing. The average size of the male population is getting bigger. With the 2024 Olympics, there is nothing for the average sized male – especially with the Finn gone.”

As for the OK Dinghy, it is part of his family culture and it would be hard to imagine him not stepping in again and repeating the success his father achieved three decades ago. 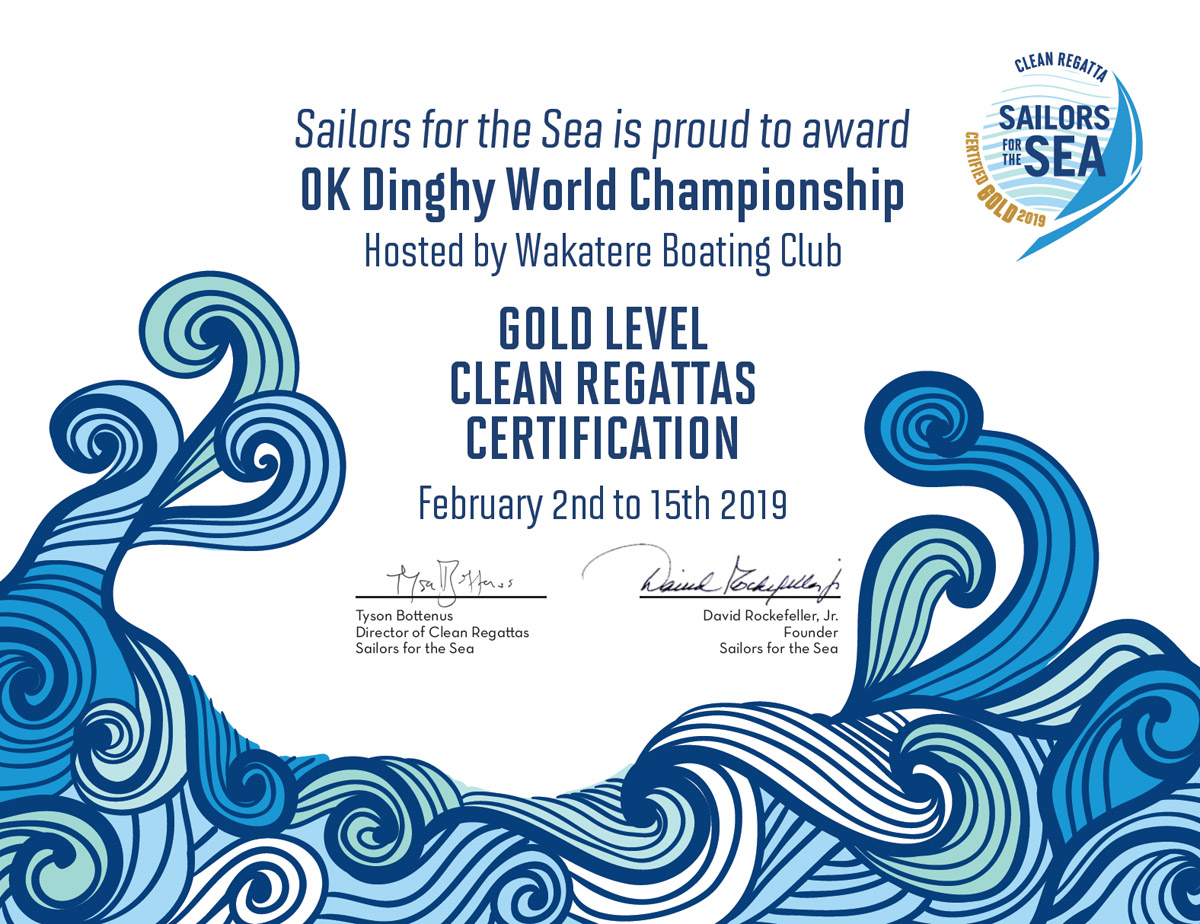 Outside of the racing the organisers of the Symonite OK Worlds did a fantastic job with hospitality and onshore management, setting a benchmark that the class is determined to see repeated. The Commodore, Simon Probert, and the Chairman of the Organising Committee, Alistair Deaves, along with the rest of the committee and volunteers worked tirelessly for five years to create what they envisaged to be “the best OK Dinghy World Championship ever”.

They had a lot to live up to. The camaraderie and social element of the class is something special and has to be seen to be believed. It has often been described as a cult as much as class and there is something in that.

Probert said, “It was so much work and we had so many people coming together to make it work. But it was also so much fun; I never wanted it to end.”

In his closing speech on Friday night, Probert effusively thanked the 30 odd sponsors for making it happen. Each had a vital part to play, whether it was providing prizes, free beer, food, transport, water or just cash. The whole was so much greater than the parts. John Cobb, director of the headline sponsor Symonite, who presented the prizes, said he was blown away by the publicity his company had gained by supporting the event.

Following a huge about of work and effort by club members, on the final day of the championship, the organising committee was delighted to receive the news that the OK Dinghy World Championship had been certified as a Gold level Clean Regatta from Sailors for the Sea.

Through the incredible support from the club and local community, Wakatere Boating Club has achieved 20 out of the 25 the best practices that Sailors for the Sea sets to create a ‘clean regatta’.

Throughout the last two weeks, it has been apparent to all competitors the club had gone to considerable lengths to minimize the environmental impact of the two events. The OK Dinghy National Championship, the week before, also achieved Silver level status. 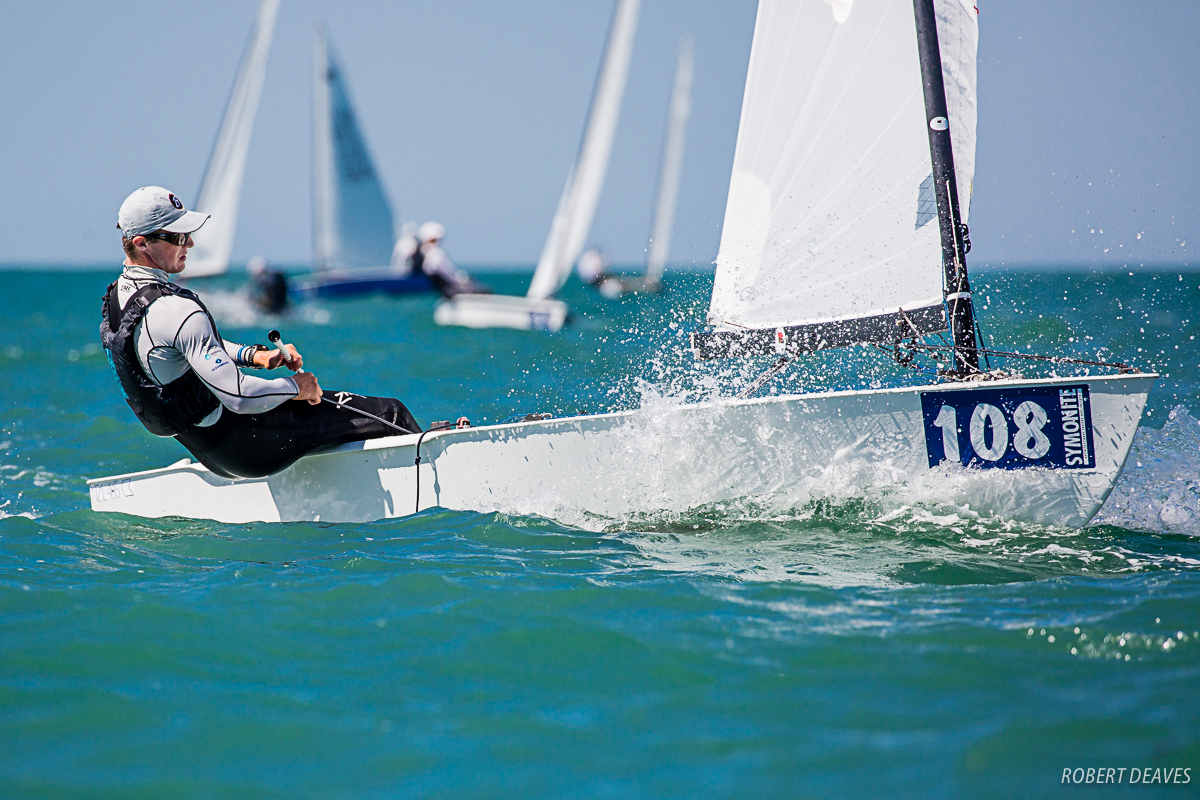 The class is mid way through a 10 year strategy of growth and development that appears to be working. One of the key jobs in the coming weeks is to ensure that the lessons learned in staging such a succesful event are not lost. The class is working with the club to document the processes and idea developments to create a ‘handbook’ to pass on to future organisers. This will be a fluid project that sets the standards that sailors now expect from regattas and will hopefully be an invalable guide to future organisers to create the kind of events that the class wants. Watch this space.

Great event management is however only part of the process. You also need great venues. In recent years the class has enjoyed events in Barbados, Thailand, Melbourne and at Bandol on the Meditteraean. Next year the class worlds heads to Marstrand in Sweden, a spiritual home of OK sailing from the 1960s. Then in 2021 it will have its first ever championship at the sailing Mecca that is Lake Garda, where it is not unlikley there will be close to 200 entries. The idyllic UK south coast resort of Lyme Regis will host in 2022 followed by The Royal Queensland Yacht Squadron in Australia in 2023.

While Slater, Lööf and ninth placed Rod Davis were the high profile names competing at Wakatere, this list is set to grow in the coming year with many others aquiring boats and looking forward to the start of the 2019 European season at the traditional Spring Cup in Medemblik in May.

As the headline in the Sail-World article said, the Symonite OK Worlds has lifted the class onto a new level for the future. One thing is certan, that level will only continue to rise. 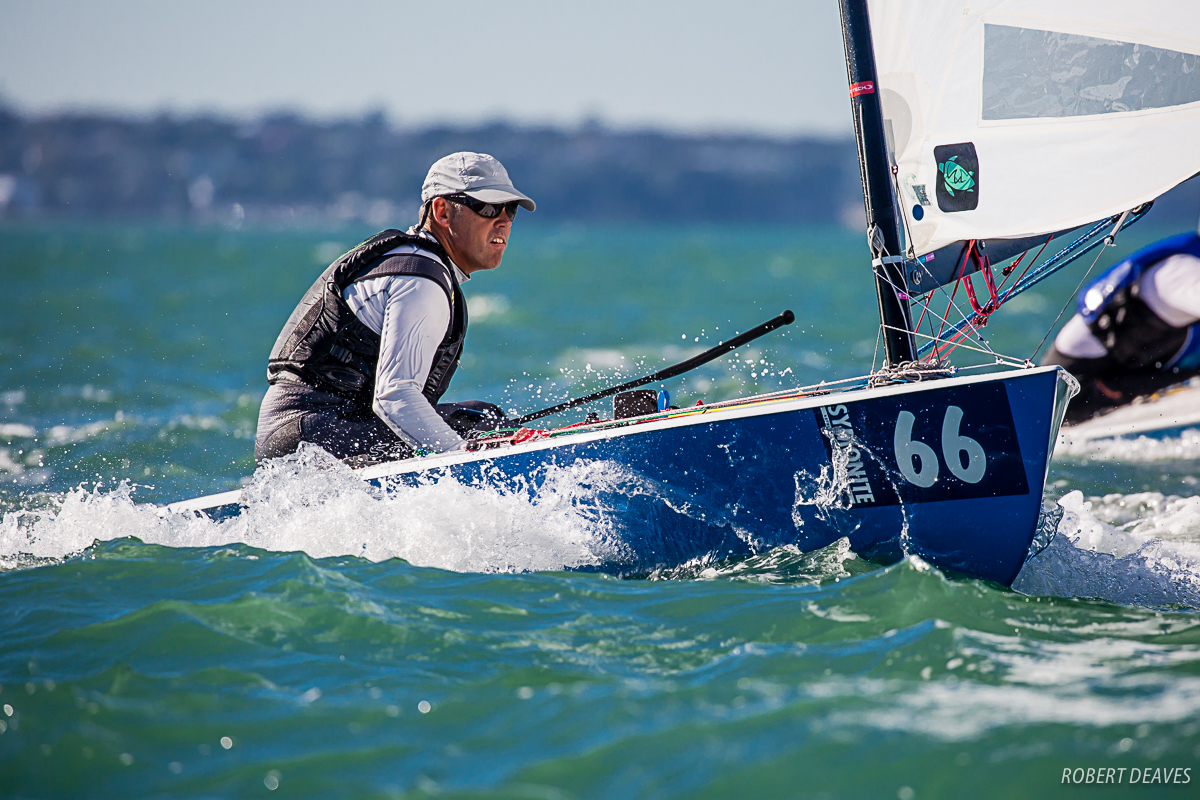 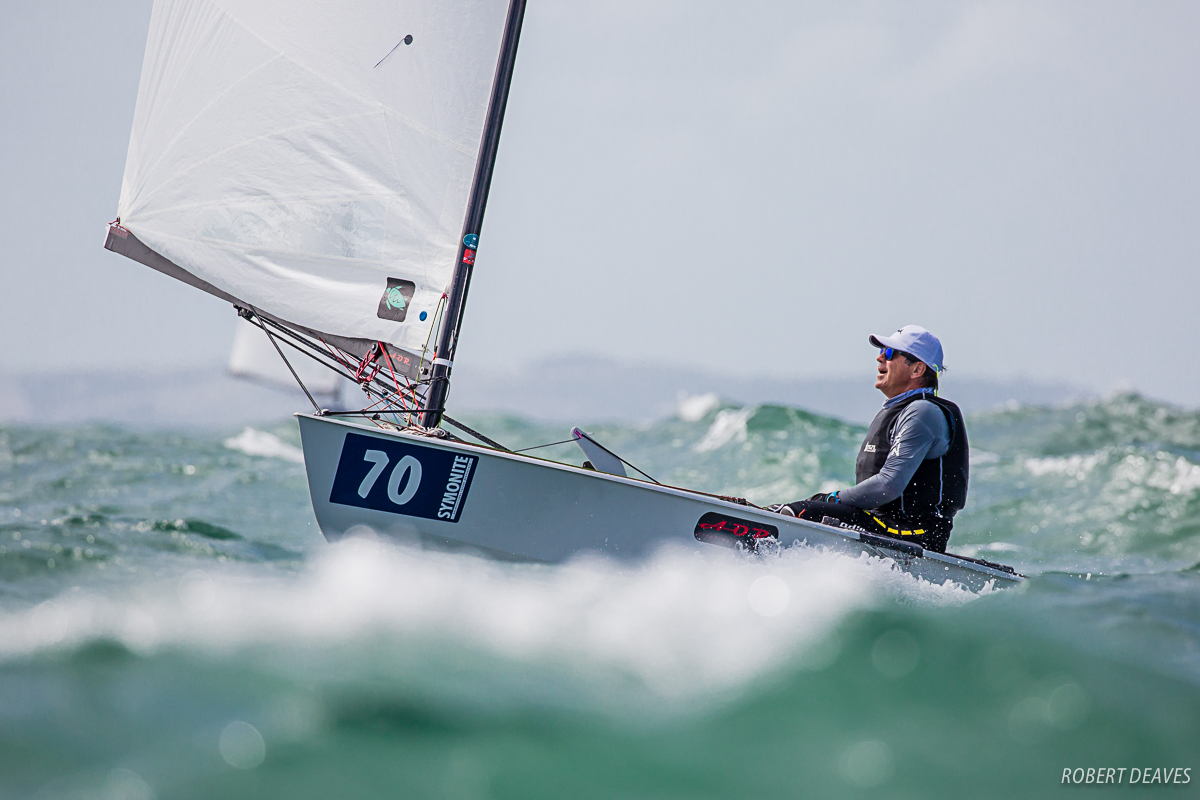 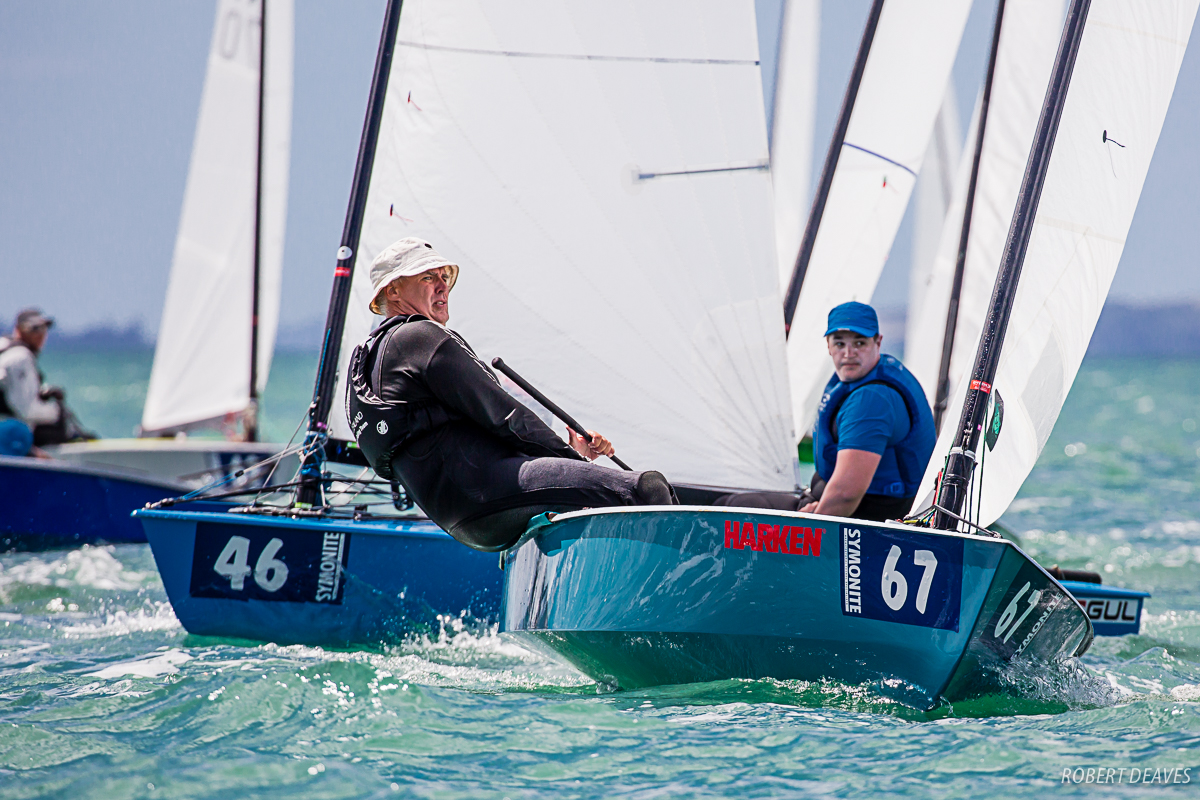