Dan Slater has won the 2019 Symonite OK Dinghy World Championship at Wakatere Boating Club after a challenging final day of racing with at first light winds, then breezy conditions, but always difficult and shifty. Fredrik Lööf almost did enough to pass Slater, but finished four points back in second, while a magnificent final race win for Josh Armit brought him back up to third overall. The first race of the day was won by Steve McDowell.

Sailing on home waters, Slater has hardly put a foot wrong all week, but today he made it look hard, even though he didn’t look particularly rattled by two scores in the 20s. But he wasn’t the only one picking up large numbers and did just enough to take the title. 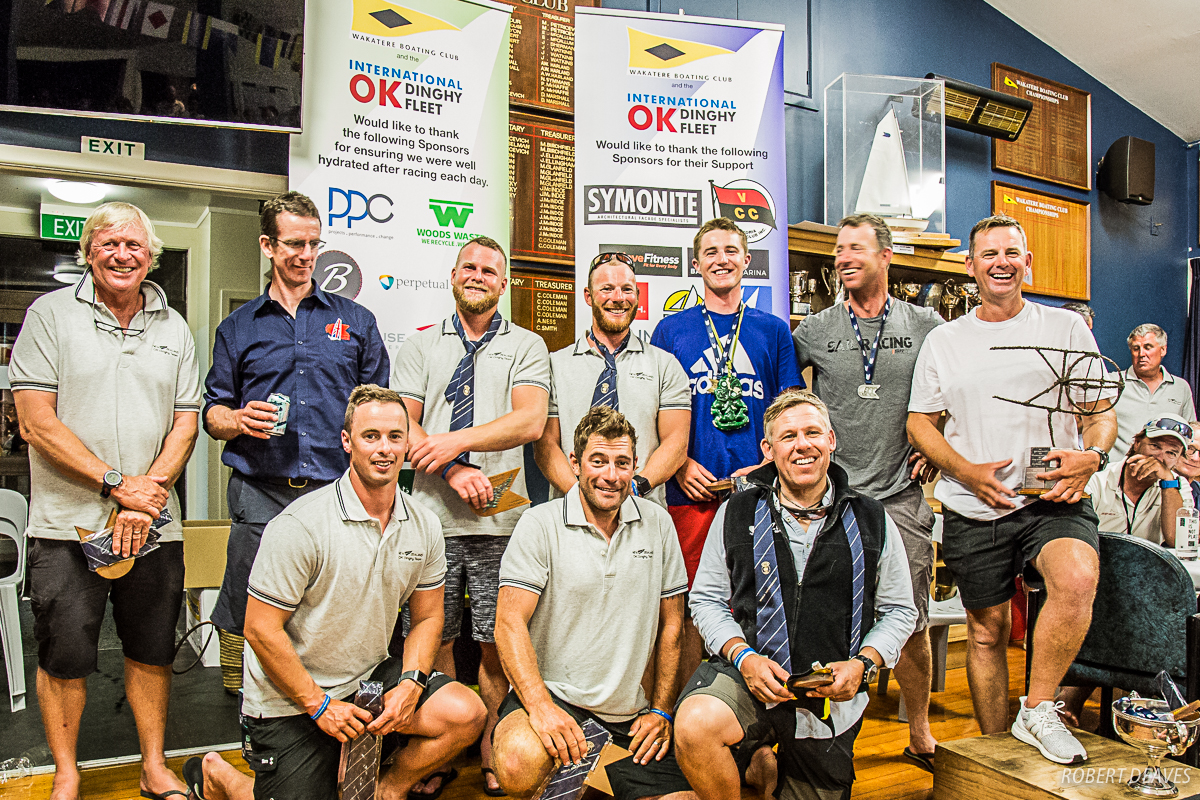 He explained his day, “First race it was tricky but I just got it wrong and chose the left and the left just wasn’t on. It shifted within a minute of the start and there was no way of getting back. I still had an opportunity to get a top 10, but just blew it with a bad start.”

McDowell won the first race by a large margin, leading at the top and extending round the course in very light winds to win from Thomas Hansson-Mild and Rohan Lord.

Slater also made a mistake in the second race, the final race of the championship.

“In the second race up the first beat I had control of the whole fleet. Great start, in control and I knew I just had to stay with Freddy. He was the only one that could beat me. We both overlaid the top by going to the wrong top mark. And then we just played truck and trailer around the course.”

They crossed the finish line together after Lööf had tried to drag him through the fleet, unsure of where the points were lying but knowing it would be his discard.
Josh Armit already had a sizable lead at the first mark and extended for a huge win from Hansson-Mild and Lord. But for two alphabet scores early in the week Lord would have been looking at a podium position instead of 11th.

While the story is about the medallists, the best sailor on the day was 2009 world champion, Hansson-Mild with two seconds. After suffering from arriving just before the worlds, “It’s been a tough week but today I had focus and felt fresh and did a couple of seconds.”

“From the social side I can only recall 1999 in Neustadt as a worlds that has been similar in terms of social events ad the camaraderie in the boatpark, especially the private sheds for each country has been awesome and I really enjoyed. I think the kiwis have shown a great hospitality and the racing has been tough and hard, but good.”

Rod Davis was the first Master in the fleet in ninth overall, “I am very happy with ninth. For this regatta it’s always hard to set the goals as I had no idea where I was going to finish. It’s been a bit preparation for this worlds, with boats and rigs and sails, and learning and I just wanted to have all the boxes ticked and then sail as well as I could sail. Wherever that ended up was going to be where I ended up. It was a regatta that wanted to fall into place. I had my fair share of breaks but probably had no bad breaks go against me, not ones I couldn’t recover from. So I am happy.”

“If you throw the dice down again and run this regatta next week, and we could have different winners. That’s just how the competition works, but I thought it was a good contest. We had a couple of days of sea breeze, a couple of days of the offshore breezes, which are shifty and a little more complicated. So it’s a good results as in terms of as quality of sailing.” 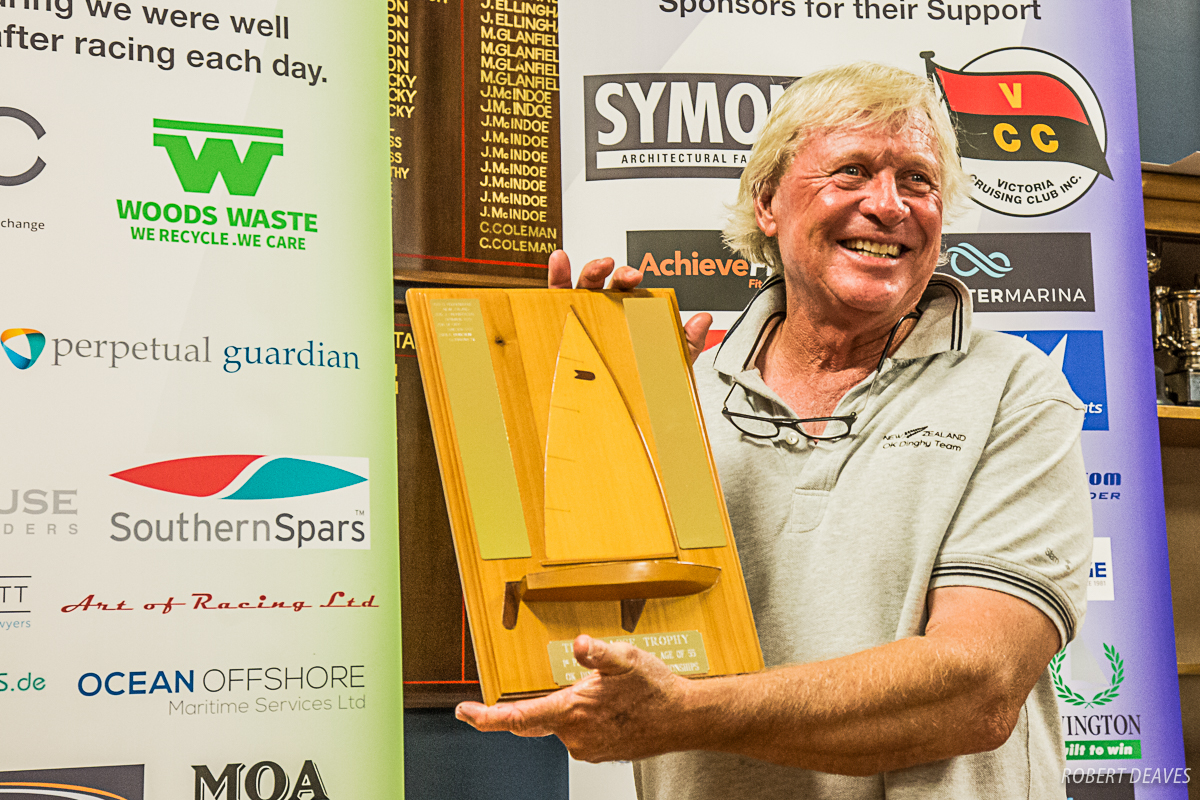 Three women competed for the women’s prize, won by Olivia Christie.
“I have really enjoyed the week. It’s been heaps of fun racing in such a big fleet and got some really good starting practice and learned a lot about the OKs as well.”

Best part, “was racing against a high quality big fleet and also the helpfulness of everyone around. I was really nice to meet lots of new people. We need more girls sailing OKs. There were three of us here and there’s not much point racing trying the race the other girls them as you have to pick them out in the fleet of 100.”

Christie was also second in the junior division behind Armit.

Löof commented on his week. “It’s been an awesome week here. I have really enjoyed myself. I came a little bit early with my son to have at least a little bit of chance at the regatta, but I got a quite a shock when I came because I saw the level of Kiwis. They were putting in a lot over the last year or two so I saw right away it was going to be a hard regatta.”

“But it’s been a good regatta. A good fight to the end, but unfortunately Dan sailed like a legend on his home waters. I don’t think even Ben Ainslie would beat him those conditions. A couple of days at the beginning of the regatta he had quite a big advantage. At least I put in a bit of pressure at the end but I am second again.”

Next year, “Yes, we have to keep going.”

“Everyone here has done such a fantastic job at this regatta to make it a legendary regatta, and it’s nice to have a Kiwi wining. When I heard about Dan I didn’t know he’d been in the class for a couple of years so for me to be second after only six months I am quite pleased and pleased with my performance.”

On winning the title, Slater said, “It’s really nice, just really nice. It’s not about the winning. I chased those dreams years ago. But it’s really neat to be able to sail against the guys that that I’ve sailed my whole sailing career against. Rohan, Freddy, Jan and a whole lot of guys like that. So to race against these guys now is great; we’ve just moved on in life.”

“And then you have a young guy like Josh Armit, who is a gifted sailor, 17 years old, fit, all the things we were when we were 17 and pushing us around the track. It’s a really neat scene.”

He was unsure whether he could defend his title in Marstrand, Sweden, next year but said, “I will definitely be back. That’s not it for me in the OK for sure, I built the boat so I could come down here on a Sunday and we could race with 18-20 boats. The neat thing about the worlds being here in New Zealand is that we used to get between 25-35 at a event but by having the worlds here we now have nearly 60 boats that are competitive, so at our travellers series we have between 30-40 boats at any regatta. So the class is strong now, really strong.”

At the end of the fabulous prizegiving ceremony at the Wakatere Boating Club on Friday evening, an invitation was made to meet again at next year’s OK Dinghy World Championship, at Marstrand, in Sweden.